My name is Anders and I'm the CEO of Brattoo Propaganda Software. We are still in Corona times and the world is upside down, and it’s long overdue since my last newsletter. Unfortunately I’ve had a quite bad “off period” due to my Parkinson’s Disease which has caused this delay, but now I’m back on track. Many things have happened since my last newsletter and it’s time to catch up on those, here we go.

Apple recently released the first developer beta of their next macOS named Big Sur which will be officially released later this year. With Big Sur comes Photos 6 which includes some new things that I will cover in a later newsletter. As always we try to make Duplicate Annihilator compatible as fast as possible, and I’m happy to say that we recently released Duplicate Annihilator for Photos version 5 which is fully compatible with macOS 10.16 “Big Sur” and Photos 6.  It is available for download today from https://brattoo.com/#photos.

I’ve had a tremendous response to my 1 on 1 training sessions and it has been great fun meeting you guys so I have decided to continue with this. I have over 25 years experience of the Mac platform, I have been an Apple Solution Expert and have held trainings in various softwares over the years. Training sessions are on request by contacting me on training@brattoo.com. The training sessions can be about anything, and will be customised based on your requests. Each session is 1 hour and costs $79 USD. If you want to learn more about something, email me at training@brattoo.com and we’ll work out a program just for you.

Yes it’s true, it’s in the pipeline. We have had this request over and over again for over a decade, and surprisingly many requests lately, so we have finally have decided to do it! It will be a version of Duplicate Annihilator that scans your entire file system for duplicate files. We plan to release it later this year so stay tuned.

Locating photos – yet another application

One thing that I learned from my 1 on 1 sessions with you guys is that there are photos everywhere and it is hard to know where they are, if there are duplicates and how consolidate them in one place. There are photos in various folders, on external hard drives, in mail attachments and in iMessages. Wouldn’t it be great if there were an application that knew which photos are already in your library, and also be able to scan your files and folders, mails and messages for images that are not already in your Photos library? And then import them? Wouldn’t it be great if only mail attachment photos from certain persons were imported, and not everything? Wouldn’t it be great if only high resolution photos were imported, and not small unwanted photos? Well, it’s in the pipeline as well!

In a recent 1 on 1 training session we talked a lot about smart albums and how they can be used to organise things within Photos. I have written about smart albums in previous newsletters, like here and here. Let’s make a small recapture of a few features than might be good to be reminded about.

Recapture 1 – the All Photos smart album and sorting

As you might now there are very limited sorting options in the main Photos Library: 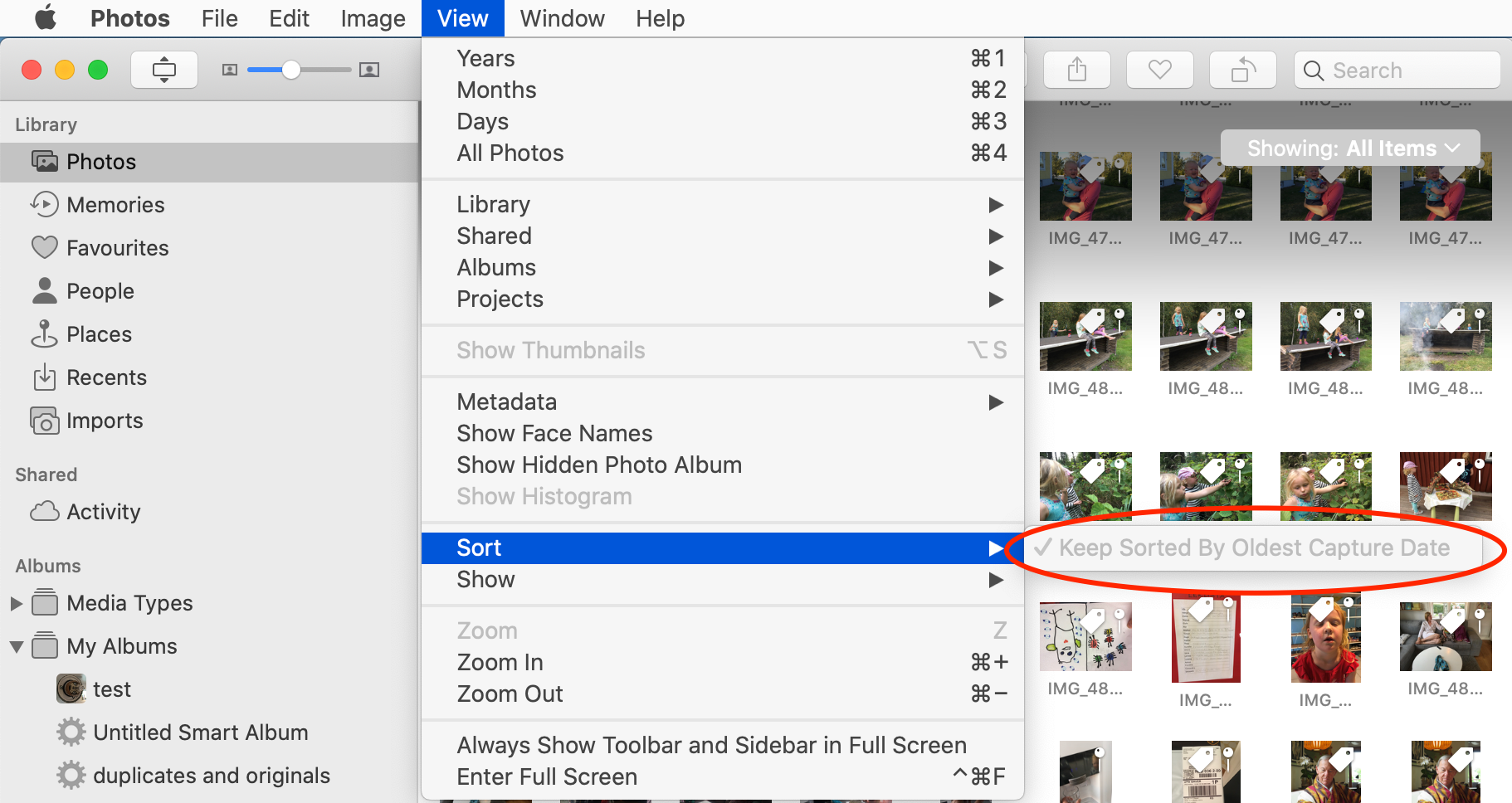 But, if you create a smart album that lists all your photos like this:

You get new sorting options: 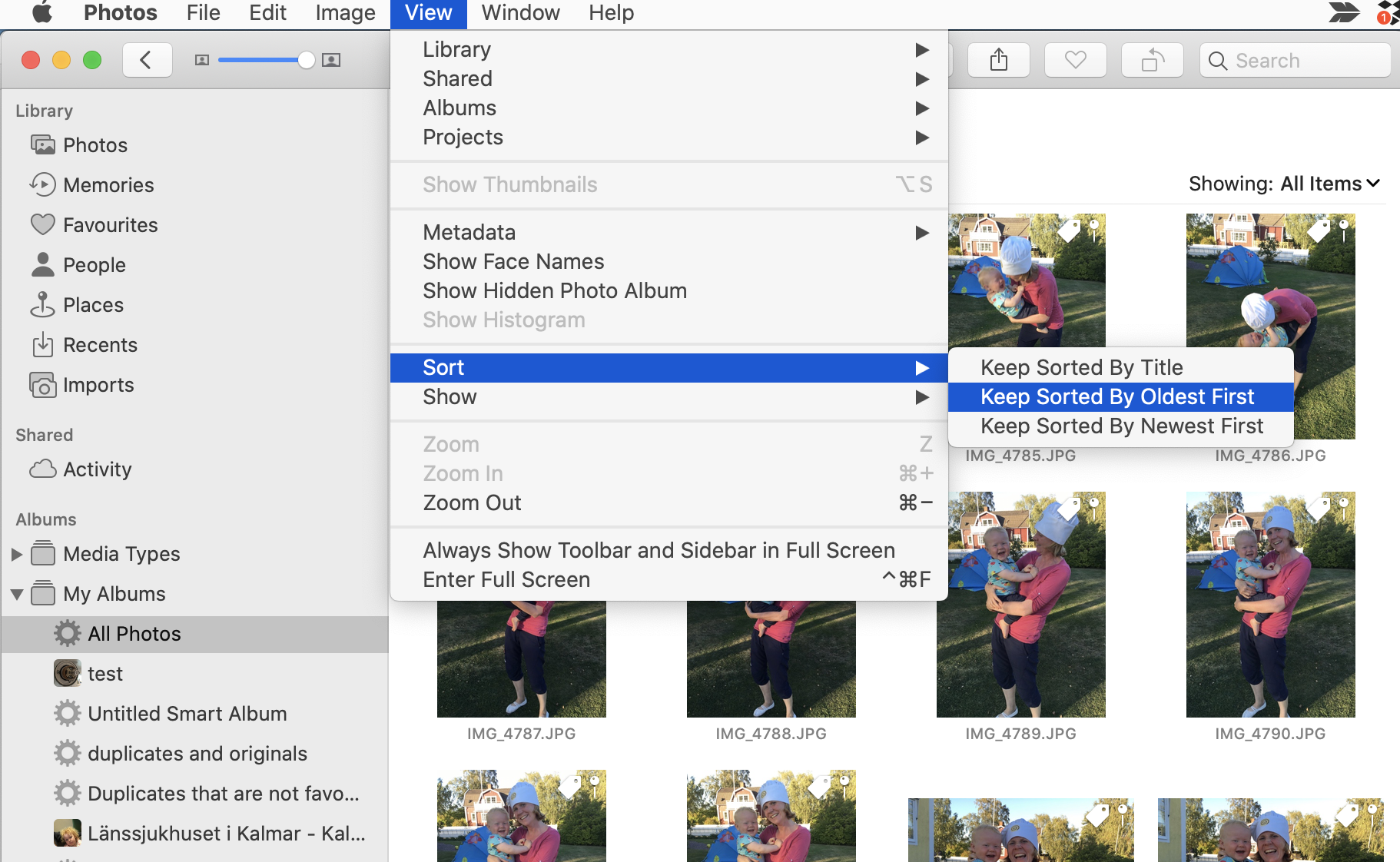 Recapture 2 – the “not in any album” smart album

Creating a creating smart album that lists all images that are not being used in any album can be a really useful tool when organising photos in to albums. This will help you keep track of which photos that you have not sorted so far.

However, if you use this you might want to know that there is a bug in Photos 5 which comes with macOS Catalina and that is that if you delete a complete album without first deleting the photos in that album then Photos will still think that the images that were used in that album are still being used in an album even though they are not. The bug seems to be fixed in the upcoming Photos 6 and macOS Big Sur.