My name is Anders and I'm the CEO of Brattoo Propaganda Software. Since 2003 we have helped people get rid of duplicate photos in iPhoto, Aperture and Photos. Finding duplicates is one thing, it isn’t that hard. But then we had new requests, our customers wanted to detect what looks like a duplicate but might be digitally different. Photos might have different resolutions, formats or compression. So, we introduced new methods to detect these photos. First by comparing metadata and then by using a perceptual hash.

This is all good but it still requires quite a lot of manual labor to determine which photo to keep. So we introduced the feature where Duplicate Annihilator keeps high resolution instead of low resolution photos, RAW instead of JPEG and HEIC instead of JPEG. All with the intention to make sure that the photos with the highest quality are kept as the originals, from a set of duplicates without any additional manual labor.

Now, it is time to refine this even further and I’m proud to tell you that today we are releasing Duplicate Annihilator for Photos v7.

Duplicate Annihilator for Photos – the next step

We all have them, lots of duplicates. But, many of us also have put a lot of effort into our photos, especially during the last two covid years when we have found ourselves with a lot of time to organize things. A big part of this is done by adding metadata such as keywords, titles, dates, geo, captions and marking favorites.

Now, when you have done this you might notice that you have duplicates. So you run Duplicate Annihilator (or any other similar tool)  to get rid of the duplicates. This is when you realize something, you have added metadata to those duplicates. Now we have a problem, you want to delete the duplicates but not the metadata assigned to them.

Let’s have a look at this example where we have three photos: 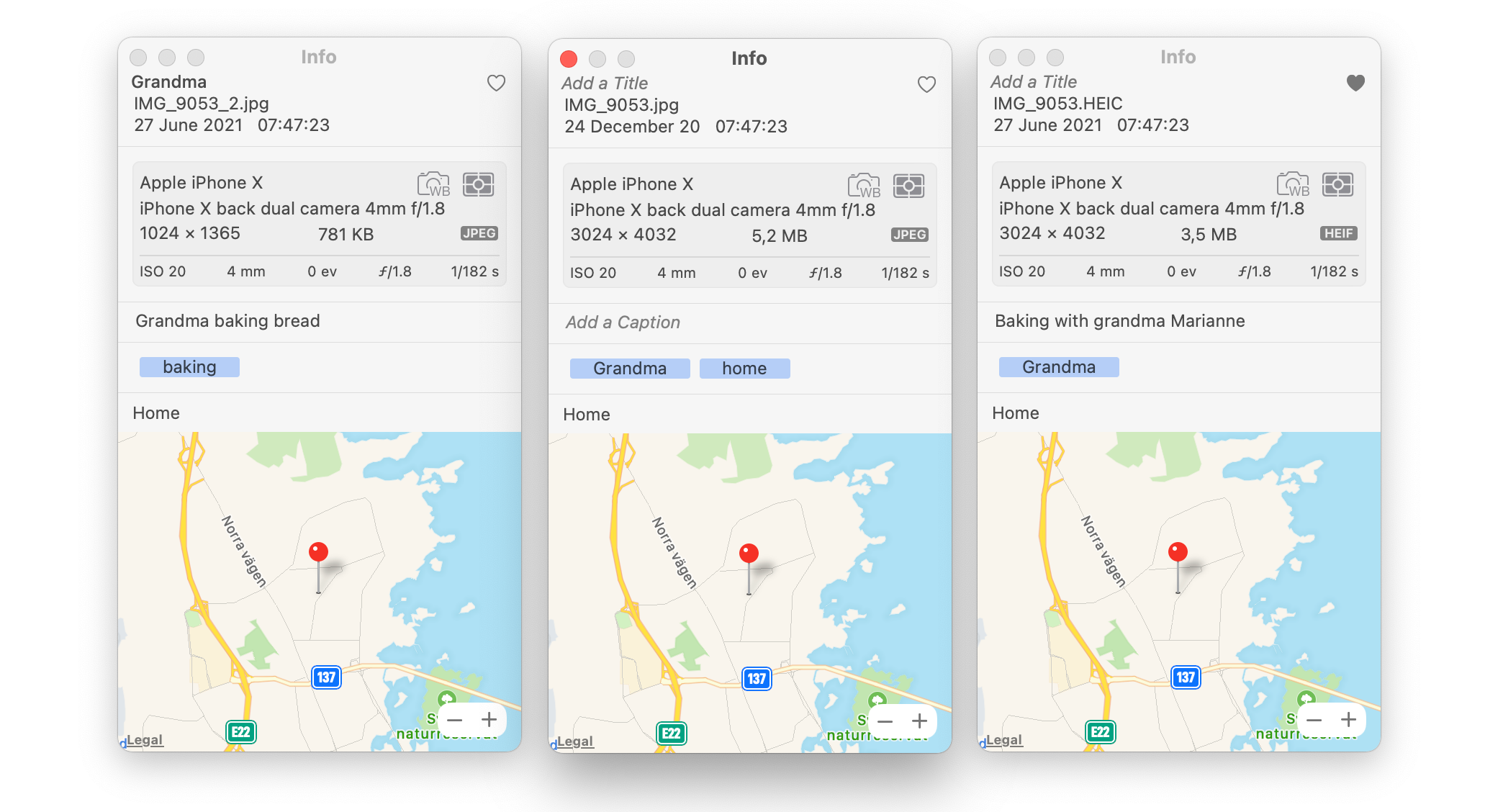 Photo 1 and 3 has the same resolution but photo 3 is HEIC so we want to keep that one. Photos 1 has a title set which photo 2 and 3 does not. Photos 1 and 3 have captions but they are different, all three photos have different combinations of keywords and in photo 2 we have adjusted the date to the correct one. Photo 3 has the favorite flag which the other two do not. So we want to delete two of the photos and we want to keep the one with the best quality. But, we don’t want to loose any of the metadata. Until today we had real problem when encountering this. Not anymore, in Duplicate Annihilator for Photos v7 we have a brand new set of settings that changes all this! 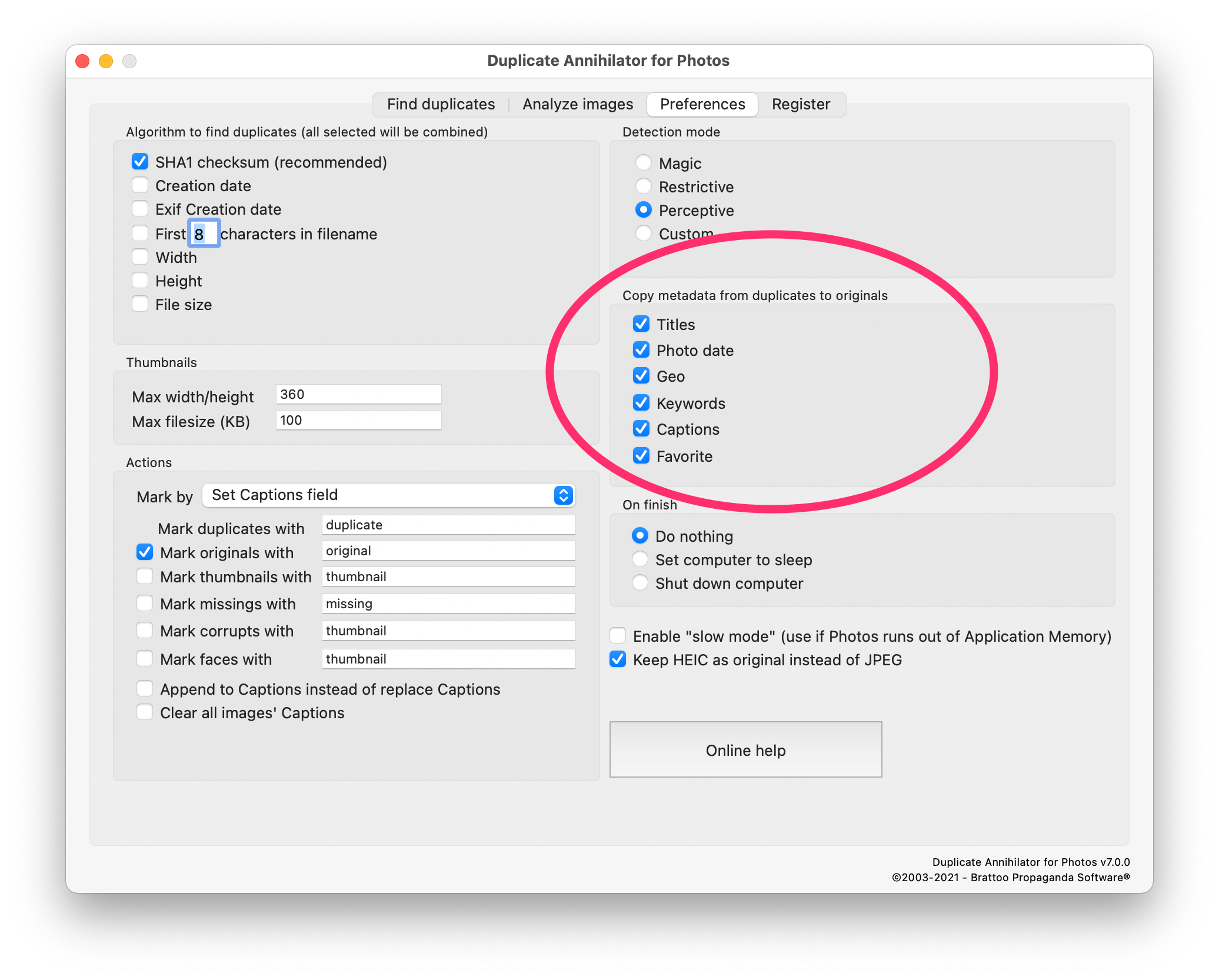 So when Duplicate Annihilator has done it’s magic on those three images this is what we have left: 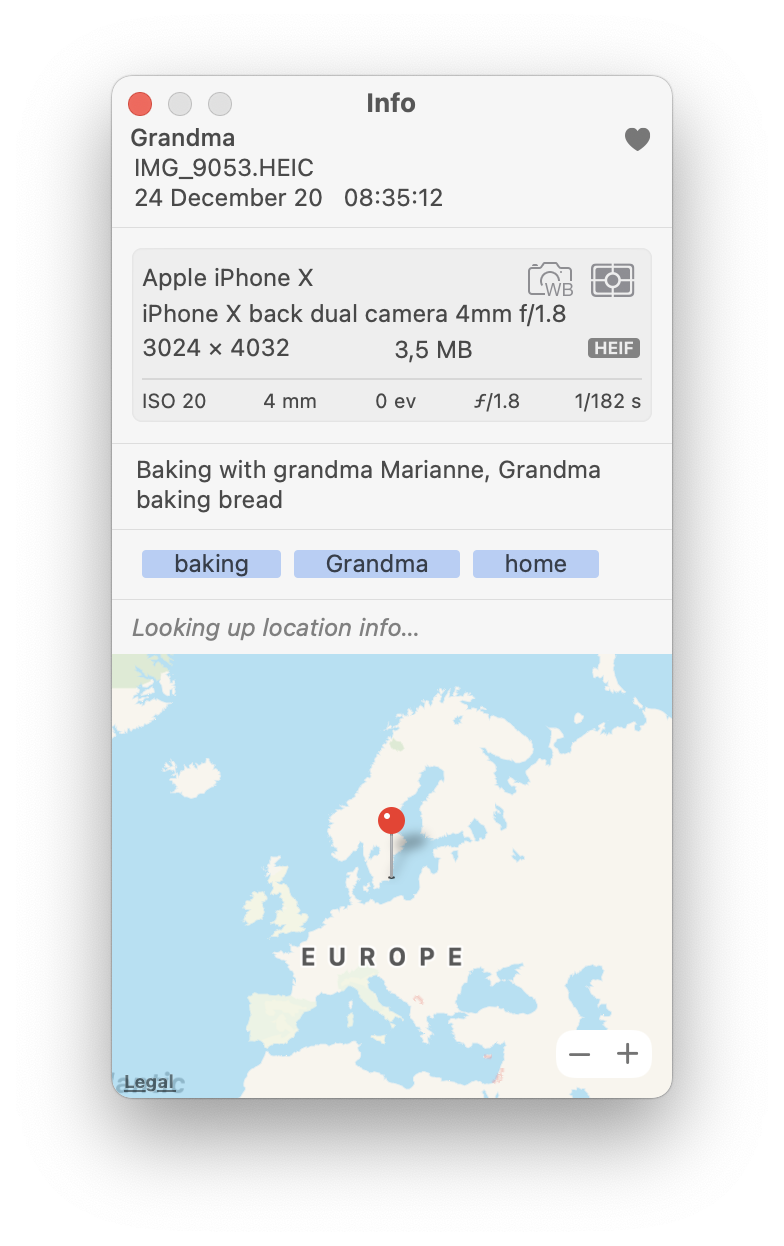 We have the high resolution HEIC image with all the combined metadata. We have the date, the captions, the title, the favorite flag and the keywords all combined into one single photo.

This is also why we changed the default way of marking found duplicates. From setting the Captions to assigning to Albums and we have also added the option to assign the current date and time to the markings, so that the result from different runs are not mixed up. It is available today for download at https://brattoo.com/#photos

In an earlier newsletter I wrote about how to locate unnamed persons in Photos by using a small trick with Smart albums. Unfortunately that seems to no longer work in the public release of Photos 7. If anyone has been able to find a way to trick Photos 7 into doing this, please let me know!

With macOS 12 Monterey there comes a really new cool feature called Live Text which I have mentioned in earlier newsletters. Live Text gives you the option to select any text, in any photo, and copy or translate it. 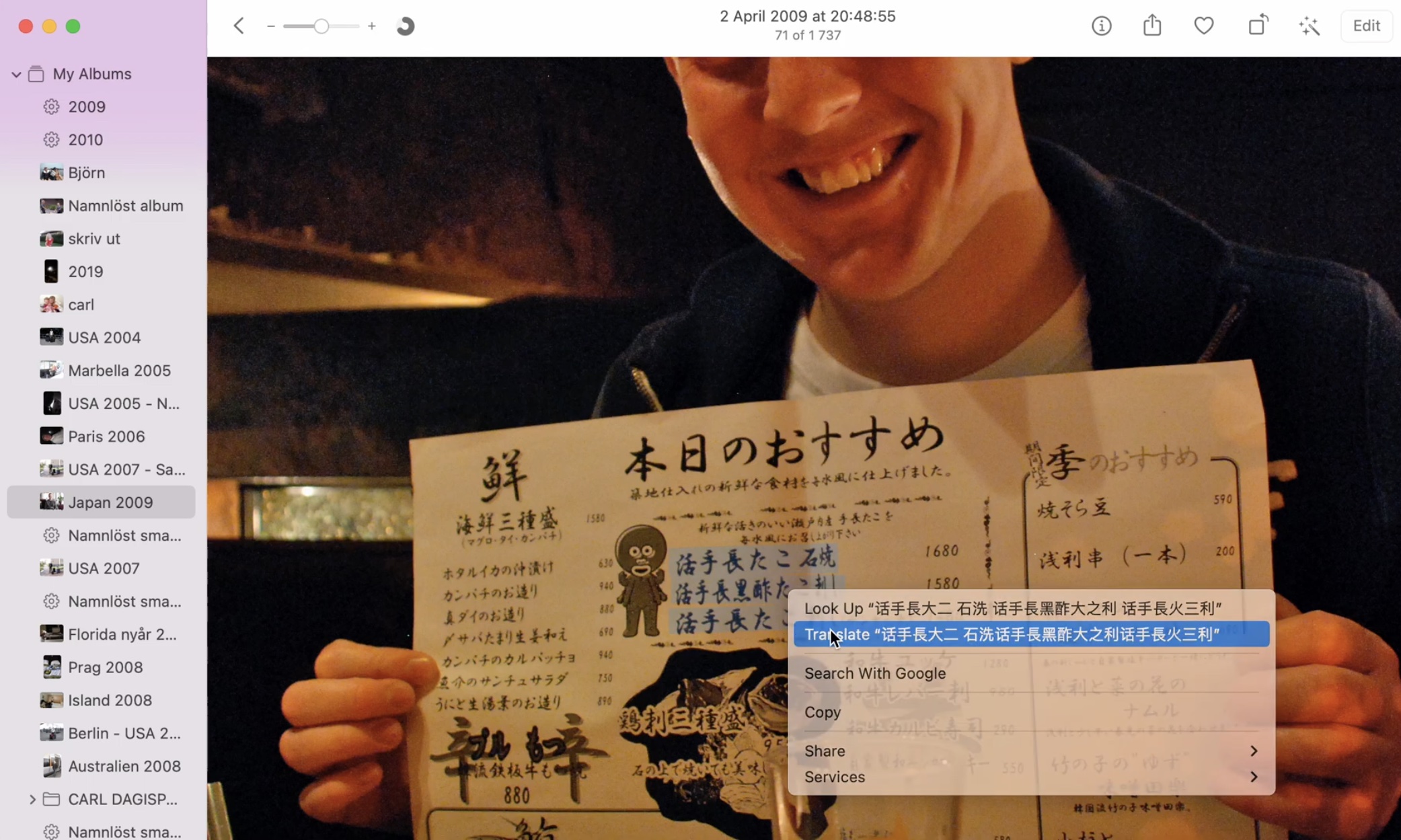 That is a really awesome feature. I made small video demonstrating it for my Patreons, you can watch it here. This new super cool feature was originally announced as only available for the new M1 CPU architecture but as one of my Patrons pointed out (thank you Reinhard) this option is now also available to any Mac running macOS 12 Monterey, which makes this even cooler. However for this feature to function you need to enable it in System Preferences→Language & Region→Live Text 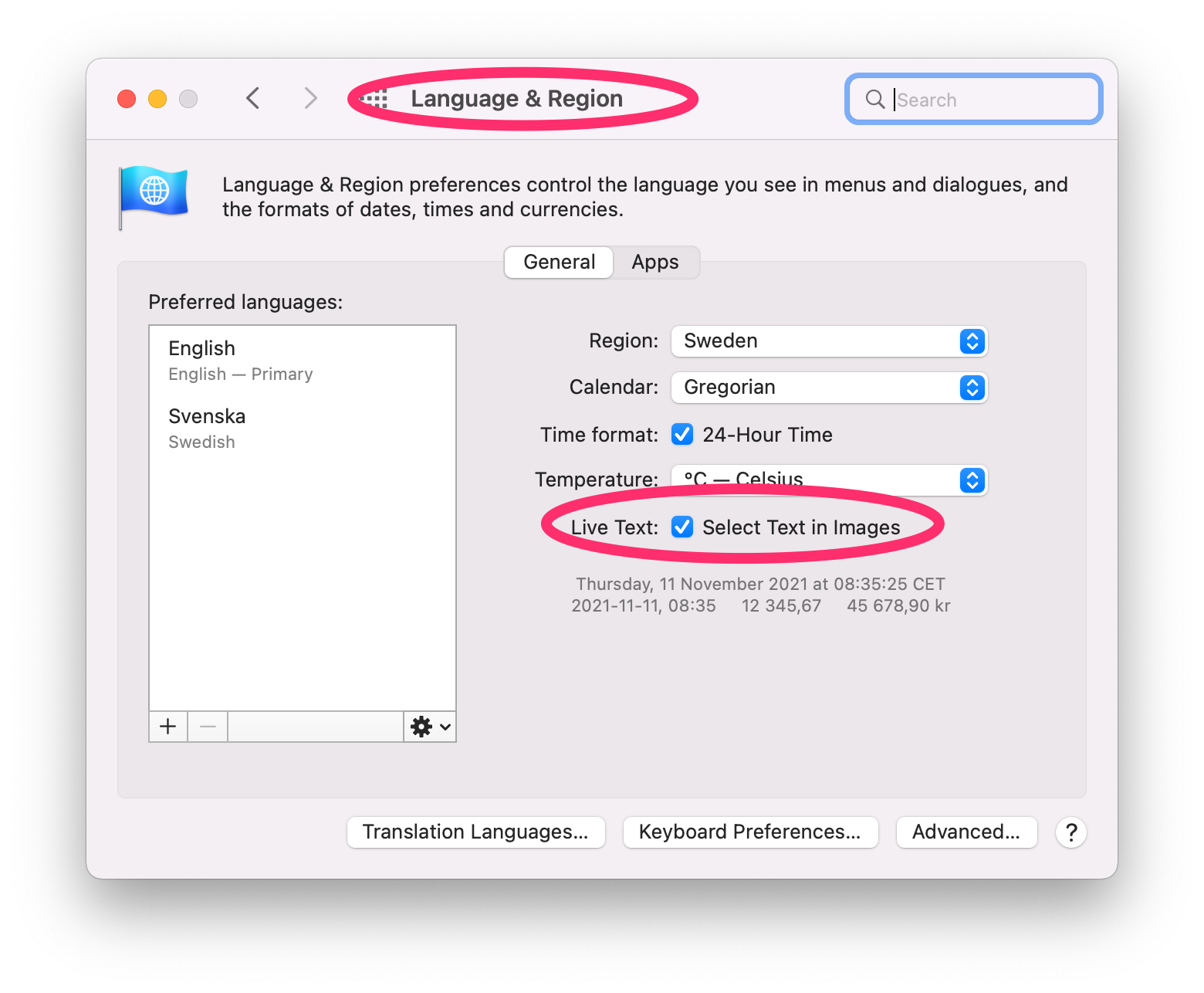