My name is Anders and I'm the CEO of Brattoo Propaganda Software. It’s time for another newsletter. It was my intention to send this email last week but a local kid got lost, so I had to prioritise things and I joined Missing People. We spent a lot of the time searching through the local woods, he was found alive and in good health. In this letter I will tell you more about how to work with Duplicate Annihilator, and also about a new idea I have that hopefully will interest you. I hope that you will enjoy it.

A new idea and a new upcoming application

I get a lot of requests for things that you want to do with your photos. Some of those ideas turned into applications in our free section. But, every app created requires time to create, update and maintain. So I was thinking that perhaps a new application that is a platform for many things would be a good idea. It will be like a toolbox. This would make it easier to provide you with more features quicker and easier. It might include small things such as copy, set GPS data and batch renaming photos. I could also Make it easier to use titles with various settings, showing a photo GPS position on Google maps or a connection to external services such as Googles Vision API for tagging. I’m sure you have plenty of ideas that you would like to have implemented, or things than can help you in your daily workflow. Let me know your thoughts by replying to this email.

When the Photos Library is selected then the “Scan for duplicates” button will no longer be greyed out and you are ready to go. When you click on it, a few dialog boxes will appear, first a box that tells you which mode you are running in and then if you have made a selection of one or more photos in Photos. Duplicate Annihilator will ask if you want to scan only the selected photos or your whole library. 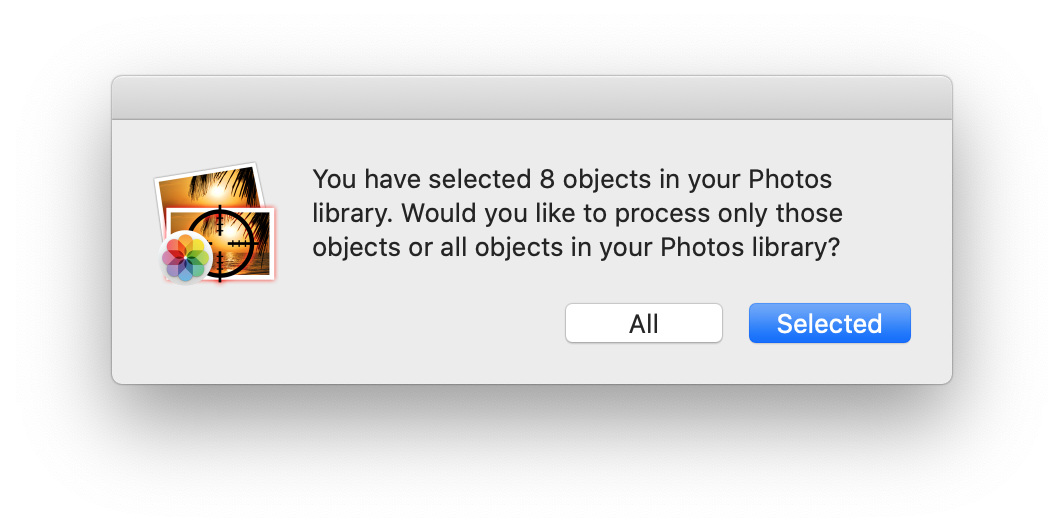 Then the process starts. You might get a spinning beachball or find that Duplicate Annihilator reports are not responding, but don’t worry, it is running just fine. In the top right part of the Duplicate Annihilator application we have a few progress indicators that will help you to monitor the progress. 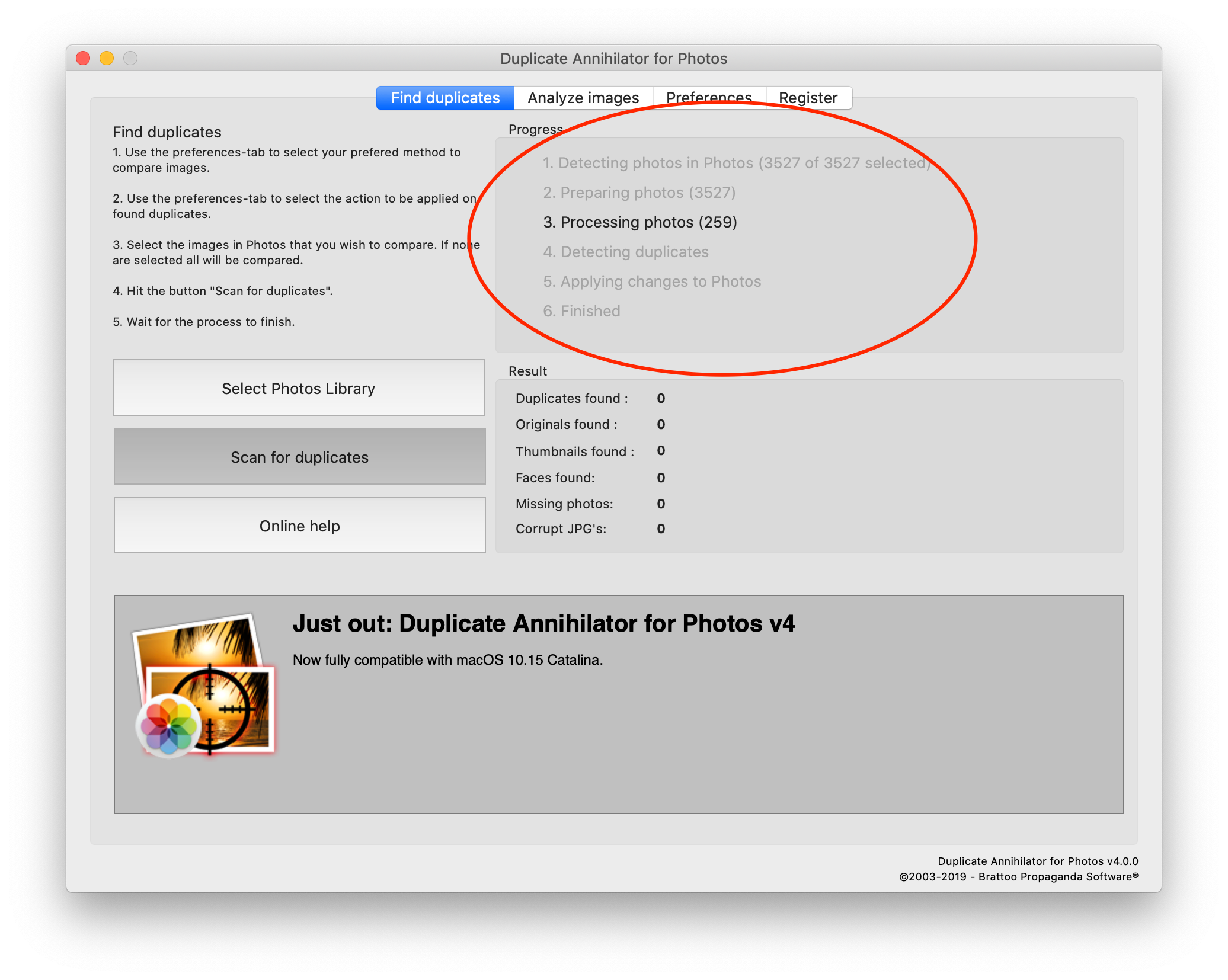 Hint: If the process just seems to go extremely quickly, and all numbers next to the progress indicators are zero, then you most likely have a damaged Photos Library. There is help though, simply quit Duplicate Annihilator and Photos and then hold down the Option and Command keys while starting Photos to repair the library.

Below the progress indicators is the Result which shows what has been found. Let me walk you through those numbers. First, we have duplicates found which is exactly that. Then we have originals found, an original is the photo kept in a set of duplicates. Photos that do not have a duplicate will be untouched, and not considered an original. Since one original can have multiple duplicates, this also means that the number of originals and duplicates might not be the same. 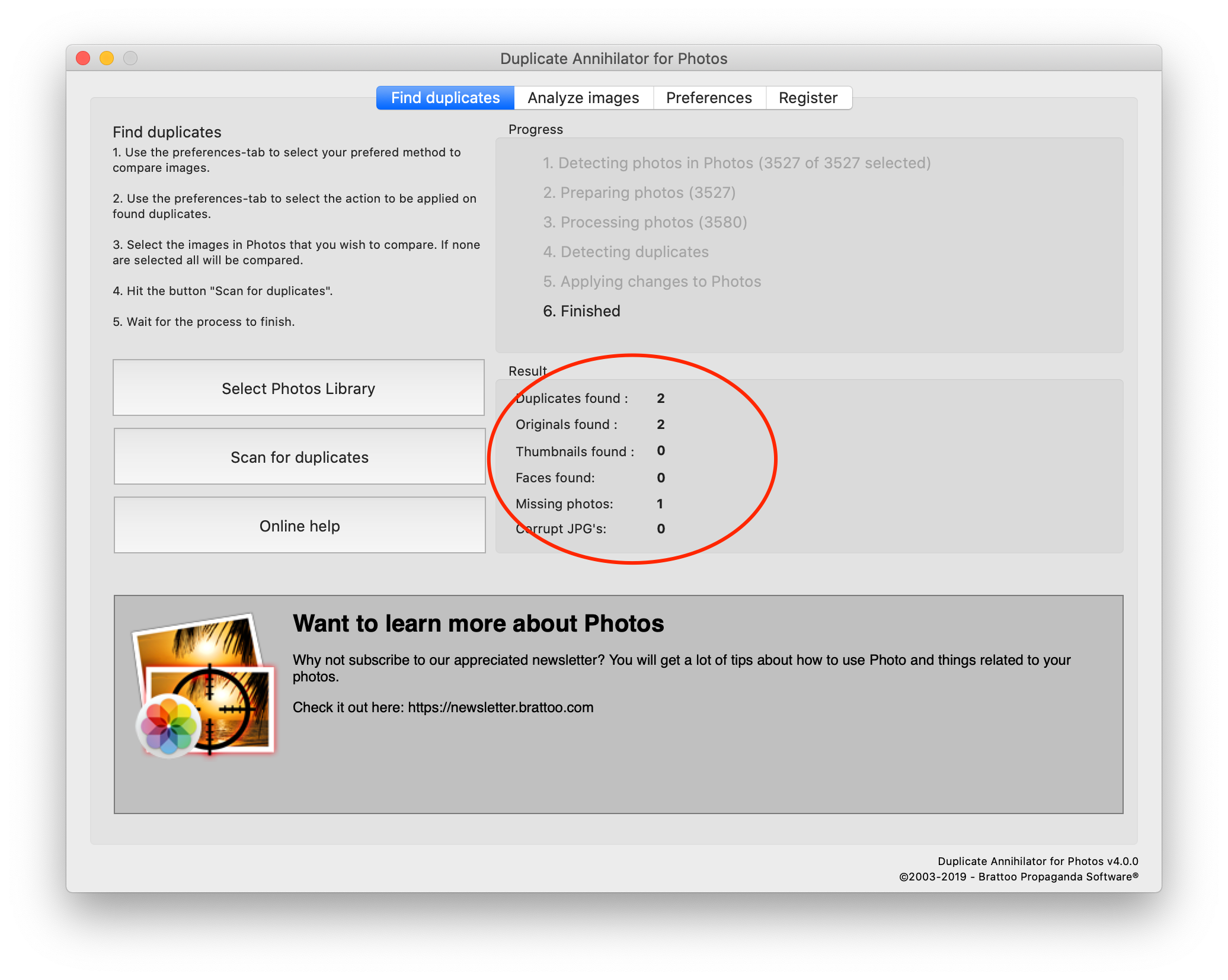 Thumbnails are small photos, by default smaller than 360x360 pixels and less than 100kB. Thumbnails were a big problem in iPhoto. iPhoto could suddenly import it’s own internal thumbnails as regular images. One problem with that is that thumbnails, and high resolution images, look the same when browsing the photos. Thumbnails are often misstaken for duplicates, but when looking at each photo one by one, then you’ll see the difference.

Missing images are photos that are represented in the Photos database, but the actual image files are not located on your hard drive. This can either be a problem, where your original photos are actually missing, or you simply have a Storage Optimized iCloud Library. A Storage Optimized iCloud Library is where some or most of your images files are actually located online, in your iCloud account, to save space on your local hard drive.

Corrupt files are rare, but we try to detect them by parsing the JPEG data in them. If the parse results in an error, Duplicate Annihilator can mark those as well.

Faces works the same as thumbnails and have the same origin. The faces are 480x480 square pictures, which used to be part of the iPhoto internals.

So, at this point you probably have a question. If Duplicate Annihilator detects a set of duplicates, how does it decide which one to keep as the original? Well, Duplicate Annihilator chooses the original based on which photo has the highest resolution and largest file size. This way RAW is kept over JPEG, less destructive compression is kept over more destructive compression, and high resolution is kept over low resolution. One aspect to this is that the HEIC format that today’s iPhones use, instead of JPEG, generates smaller file sizes but have better quality than JPEG. Therefore, we have the Keep HEIC as the original instead of JPEG setting the the Duplicate Annihilator settings. If you want, you can read more about the HEIC format in a previous newsletter.

So, Duplicate Annihilator found some duplicates, what do we do now? By default, all duplicates detected by Duplicate Annihilator have had their description/comments field set to the word “duplicate”. This way they are easily located and easy to delete in Photos. Use the search filed in the upper right corner of the Photos application and search for “duplicate”.  Please make sure that you don’t search for “duplicates”. The shown photos are your duplicates and you can select them all (Command+A) and delete (Backspace) the duplicates with just a few mouse clicks or keyboard shortcuts.

Thank you for your time, I hope that you found this email informative. If you have any feedback, suggestions, questions or ideas then please reply to this email. I read all emails and reply to them in person.