My name is Anders and I'm the CEO of Brattoo Propaganda Software. In an earlier newsletter I have written about your digital afterlife and digital heritage which is important, but there is another side of this as well. What if you outlive the Photos application? What if Apple decides to discontinue Photos, or if you decide to leave the Apple platform? How can we make sure that all that time and effort you have put into organizing your photos is preserved?

Most of us use Albums to some extent, it is the natural way to organize things. It is what we are used to doing and have done for decades, photos are organized in Albums. However, Albums are like files on your desktop, when there are a lot of Albums it’s hard to get a good overview, and it can be hard to find that album that you are looking for. This is when you start to use Folders.

Folders are in the Finder, a place where you put things, in this case you put Albums in Folders. Some like to organize their Albums into year folders or a folder might be based on categories like Family, Vacation and Work. Some might even use subfolders like Year→Vacation→Place. 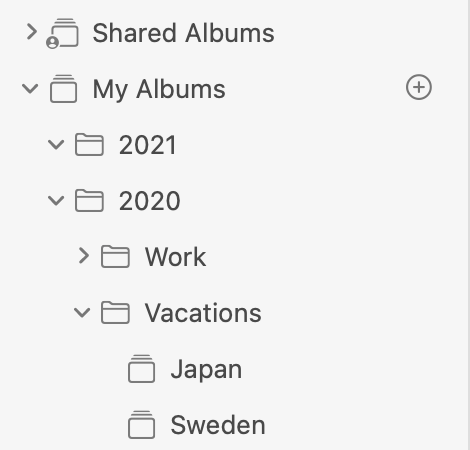 If you haven’t started working with Albums and Folders, it might be worth having a look at them.

Which photos have I assigned to Albums?

So you have put a lot of work into organizing your photos into Albums and Folders, which is great, but how safe is that structure? By safe, I mean can it be preserved if you for any reason decide to move away from Photos, merge two Photos libraries or start to use another application to organize your photos? Let’s have a closer look at this.

If you merge Photos libraries using iCloud, as I described in an earlier newsletter, Albums and Folders will be copied but not merged. This means that if you merge two libraries, that each have an Album named “Vacation”, then you will have two “Vacation” Albums in the resulting library.

If you use the new import feature in the upcoming Photos v7 then your photos will be imported along with their metadata like Keywords, Captions and Titles, but Albums and Folders will not be imported.

If you migrate to another application and export your photos from Photos by using the Export feature and the checkbox Export IPTC as XMP is checked, then your exported images will have side car files that contain the photos metadata such as Keywords, Captions and Titles but no albums or folders are found here.

The solution – the Albums and Folders to Keywords application!

We built a small tool that will help you with this. A free application that copies the Folders and Albums names as Keywords to your photos. This way your Folder and Album structure will follow your photos and can easily be re-created. It can even store the full folder/album-path as a single keyword if your prefer that. Let’s have a look at what it looks like when applied to photos in the structure at the top of this newsletter: 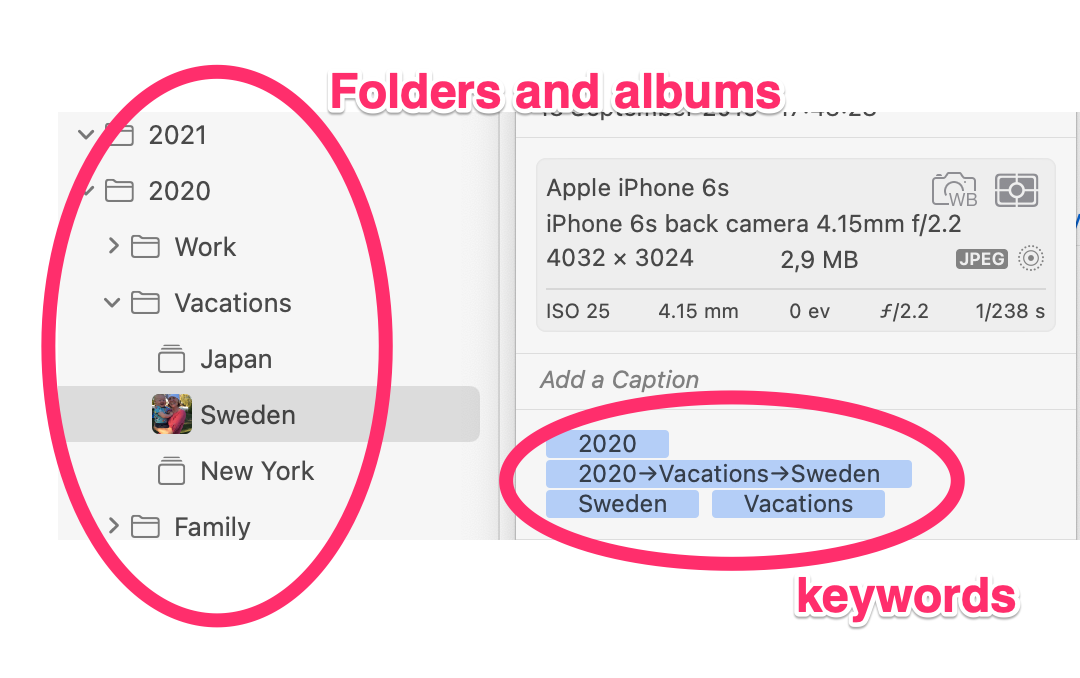 This also means that by using Smart Albums, and your new Keywords you can create entirely new Albums automatically like this one:

You can download the Albums and Folders to Keywords application from https://free.brattoo.com.