My name is Anders and I'm the CEO of Brattoo Propaganda Software. In my last newsletter I wrote about Duplicate Annihilator for Photos v7, and the new features that allows you to merge the metadata between duplicates into one original. Since then we have added even more features that I will describe in more detail later in this newsletter. I also have some interesting things about Photos and iCloud, our free apps section and news about Duplicate Annihilator for Finder. I hope that you will enjoy it.

When we gave you the option to merge metadata from duplicates into the originals, we decided that perhaps it is a good idea to stop marking the found duplicates by setting the description field. If you made multiple runs, those marks would also be merged and create a mess. So in Duplicate Annihilator for Photos v7.1.0 we changed the default method of marking found duplicates from “Set Caption Field” to “Assign to Album”. I know that many of you have missed that option, but it has been there for quite some time and you’ll find it in the Duplicate Annihilator preferences: 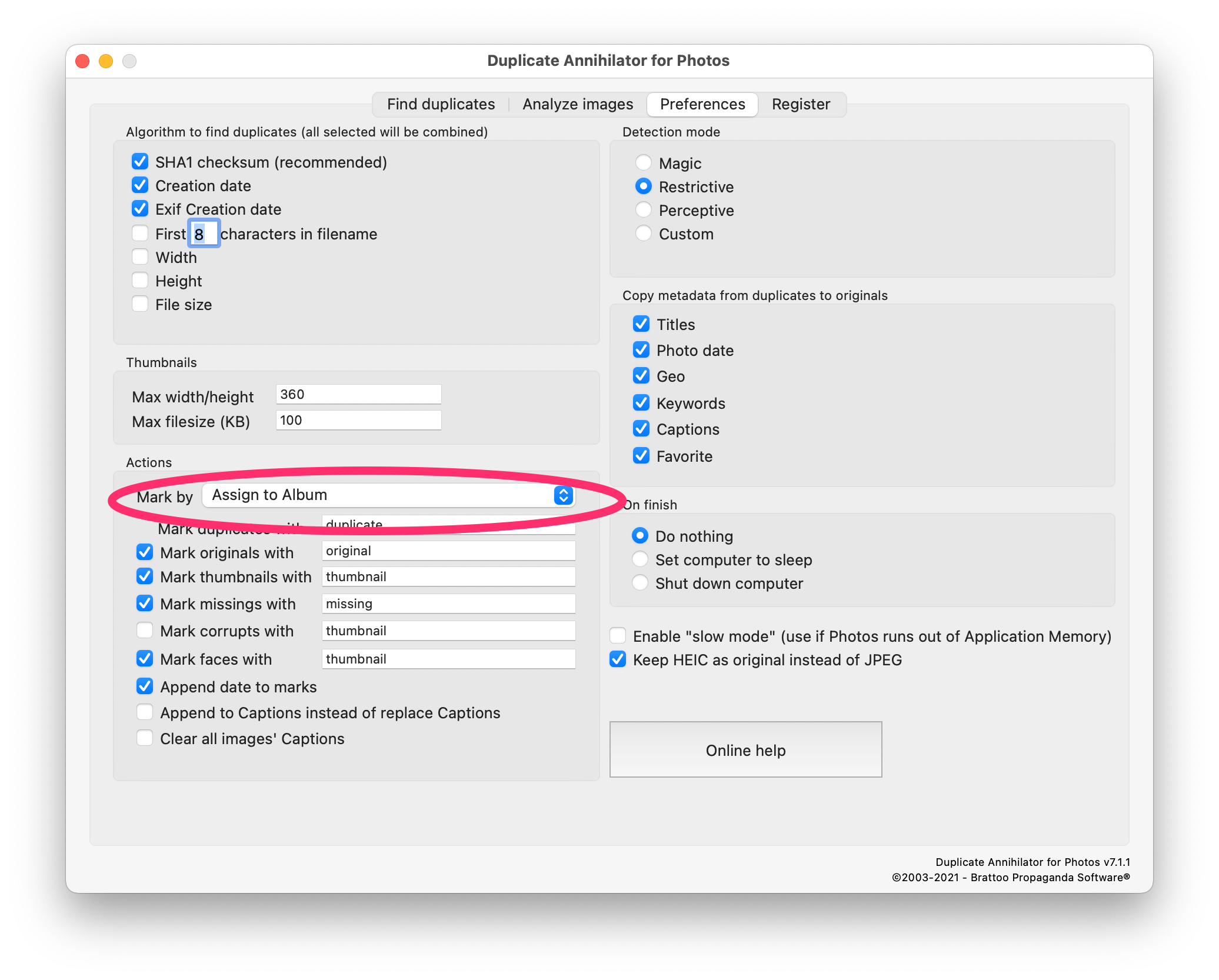 I had a 1 on 1 Training Session with Rick in New Mexico, and discovered something new. Rick scans a lot of photos and he stores them in really low compressed JPEG versions. But then, he decided to recompress all his scanned photos and instead use HEIC (which I had written about in a an earlier newsletter). He used Duplicate Annihilator to get rid of duplicates and keep the HEIC versions instead of the JPEG’s. Well as it turns out, the JPEG photos had such a gentle compression that it fooled Duplicate Annihilator into keeping the JPEGs instead of the HEICs. That has now been fixed in Duplicate Annihilator v7.1.2.

Well, that has now changed. With the help of some clever fixes, and a little bit of magic we have a solution! Duplicate Annihilator can now look for duplicates among photos, no matter if they are located on your hard drive or only in iCloud, when running in Restrictive, Magic or Perceptive mode. While doing this we also implemented some speed performance updates at about 2X as fast in Restrictive mode and 2.5X as fast in Magic mode. These fixes and features are part of Duplicate Annihilator for Photos v7.5.0 which is available for download today!

I have often mentioned our free tools section. Here you find small applications built based on customer requests. Until now, we have released them as free tools. However, we get more and more requests, and it is becoming more time consuming to keep them all up to date. So, we have to make some changes. We love to be able to provide our customers with custom tools based on their needs, but we have to be practical. So the plan is to create a new application where we implement all those tools. This will make it easier to build new features, add new functionality and keep things up to date. This will also make it easier and faster for us to implement your requests. This new application will be a payed for app and we hope that you are OK with that.

The first new feature that will go directly into this new application is this: You might have experienced that sometimes Photos seems to never finish downloading photos from iCloud. You might have tried different things such as preventing your computer from going to sleep, making sure that Photos is up and running and leave the computer running over night. Sometimes nothing seems to work!. Well, we have found a way to force Photos into downloading all photos from iCloud, and make sure that all your originals are safely on your computer within your Photos Library.

Large Photos libraries and iCloud – a word of advice

I recently discovered something that can occur when you have a large Photos library which is synced with iCloud. I would like to make you aware of this, since it may affect you when doing things such as merging libraries by using iCloud (as I wrote about in an earlier newsletter). My library is fairly large, just around 1TB and contains about 150.000 photos. 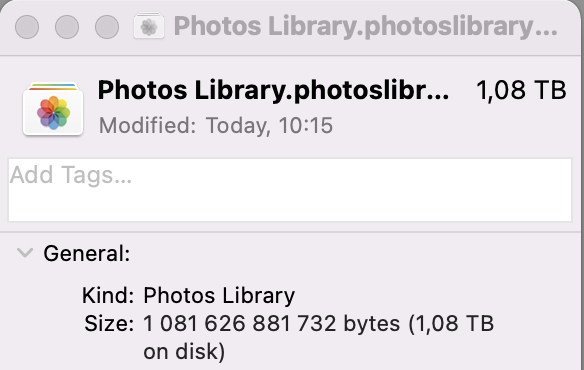 I have a 2TB iCloud account so that is not a problem either.

So I created a new empty library, made it the System library and enabled iCloud for it. Photos started to sync the empty library with iCloud. So far, so good. Then, after just a minute or so I closed the newly created library and deleted it. I reopened my old Photos Library which is previously fully synced with iCloud. I made it the System Library again, and checked the iCloud Library checkbox in the Photos preferences. Now I had a problem.

Photos noticed that my library is over 1 TB on my hard drive, and I only have 840 GB left in iCloud. Photos does not care about the fact that my local library and iCloud contain the same library and the same photos. So what happens? Photos helpfully opens a dialog box and asks me to upgrade my iCloud storage, since it thinks that I need more than 2TB although I don’t. The only problem is that there are no options larger than 2 TB so I can’t continue. 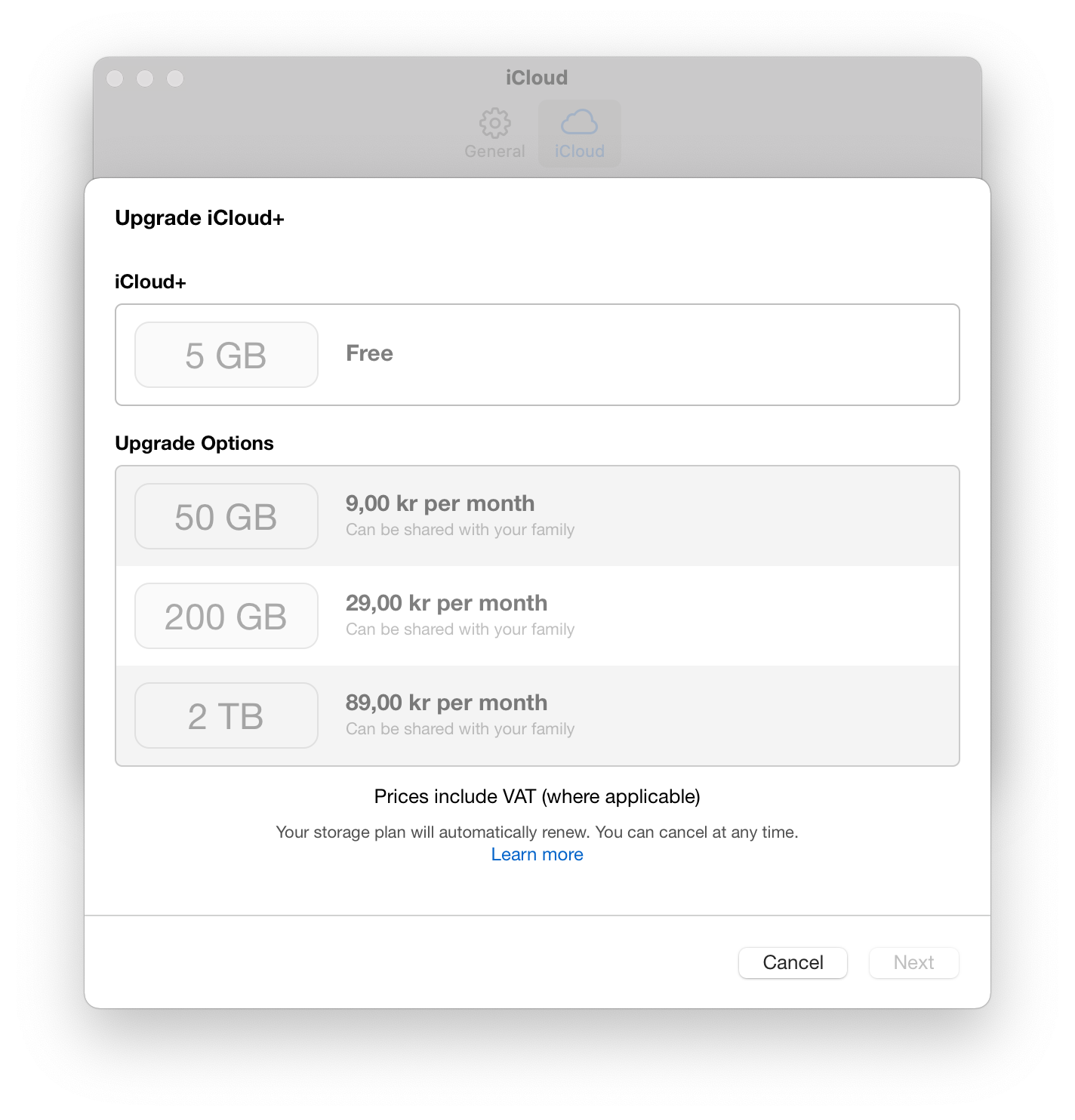 This left me with a Photos library that is already synced with iCloud, but I can’t enable iCloud and continue to sync it. So now my only option is to delete my local library, create a new library and download everything once again from iCloud. I would say that this is a bug, and I hope that those of you who work with Photos and iCloud development at Apple read this newsletter and find a solution to this.  So keep this in mind if you have large libraries that you intend to merge or sync with iCloud. You might end up with a library that can’t be synced at all.

Yes, it is true. We are working on a version of Duplicate Annihilator for Finder and regular files. We get A LOT of requests for this and we really would like to give you the software right now but… the thing is, writing a program that finds duplicates on your hard drives is really easy. It is about a 15 minute job. But it is also a really powerful and potentially dangerous tool! So, currently we are looking at all kinds of edge cases where deleting duplicates is a really bad idea. We are trying to find a good balance between power and safety.

Deleting duplicates, what could possibly go wrong you might ask yourself. I’ll give you some ideas of what might happen.

Let’s say that you get a lot of photos of your grandchildren in your email, you import them to Photos. When you run the duplication tool it scans through your home folder. It will probably work through it in alphabetic order so it finds your Library folder, and within that it finds your mail folders and eventually your attachments folders where it finds a lot of photos. Eventually it arrives at your pictures folder where your Photos library is located. The Photos library is actually just a folder, and in that folder it finds the originals folder. The only problem is that the files in the originals folder matches the files in the mail attachments folders, and perhaps the software. Consider the first encountered version to be the duplicate, and if so, you might start to delete photos from your Photos Library. This is bad.

As you can see, deleting duplicates in the Finder can be dangerous and we really want to do this right so stay tuned. And yes, both the scenarios above happened when we tried other applications that delete duplicates so be careful.

Every now and then I send out personal requests to you and here is a new one. My daughter, 11 years old, studies English at school and wants to have some penpals around the world, so that she can improve her English and find some new friends. Well, if you feel that you know someone who might be interested in having a Swedish penpal then he or she can send a letter or postcard to (as a precaution I won’t reveal her name here):